Do One Thing Well

This workshop at the FGNA 2016 Conference in Asheville NC explores a key transitional work in the Feldenkrais corpus: Practical Unarmed Combat (1942). Taking selected lessons from the book, workshop participants will explore the self-defense lessons and examine both the movements themselves and the learning strategies Feldenkrais developed to teach them.

The workshop will interest practitioners and students, martial artists, and anyone seeking to understand the application of the Method to practical situations. It will also appeal to those seeking an understanding of the roots and development of the Feldenkrais Method.

Before Moshe Feldenkrais was known for his remarkable Method of somatic education, he was an accomplished and well-known martial artist. He experimented with many of the ideas and techniques later incorporated into the Feldenkrais Method by teaching Judo. 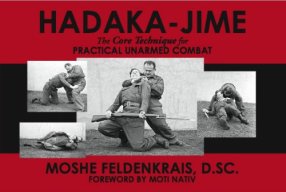 While most students of the Method date the start of his work to the publication of Body and Mature Behavior in 1948, Feldenkrais published a small book called Practical Unarmed Combat in 1942 that laid out many of the concepts seen in later works. Long out of print, this book was republished in 2009 through the work of Moti Nativ.

Practical Unarmed Combat focuses on doing one thing well and then learning to expand that skill. Feldenkrais taught a single technique: a Judo choke called Hadaka Jime or Naked Choke. He proceeded to demonstrate how this single technique could be applied in a wide range of situations once it had been learned well and clearly understood. The deconstruction and organized reconstruction of movement that became Feldenkrais’ trademark were first laid out in this work.

During WW II, Feldenkrais found himself stationed in Scotland doing research for the British war effort. Britain was an armed camp in those days. The young men not serving in first line military units served in Home Guard units protecting the coastline and inland military facilities. Hastily raised and poorly trained, these units often had little training in unarmed combat. In case of real hostilities, these ill-trained and ill-equipped troops would likely face highly trained German paratroopers or special forces. When one of their commanders discovered Feldenkrais was an accomplished Judo teacher, they sought his help to develop a program for the Home Guard.

Feldenkrais’ experience teaching real self-defense to Jewish settlers in Palestine taught him that complex strategies often failed in the face of real-life stress. Simple, practical means were required so that they could be taught, understood, and practiced by a wide range of student-soldiers. He took what he had been studying about the brain, the nervous system, and learning and combined in with his extensive Judo knowledge to create a mini-Method designed for a specific need. 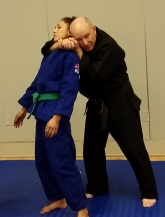 In the workshop, we will learn to perform Hadaka Jime safely and easily using Feldenkrais’ lessons. We will explore the situational variations in the ten lessons in abbreviated form. We will work in pairs with each partner getting a chance to explore the movements and lessons. The workshop will be more active than a typical Awareness Through Movement lesson but does not require any particular physical conditioning. We will be sitting, squatting, and standing in the lessons. We will be in close physical contact with practice partners. No special clothing is required. No martial arts experience is required (and is probably helpful!)

Our discussion will focus on the teaching strategies employed by Feldenkrais in this approach and how these strategies can be applied to specific movement skill learning today.

Terence McPartland is a Guild Certified Feldenkrais Practitioner and a lifelong student of Judo. He started his Judo training in 1971 and is currently a third degree black belt. He serves as Educational Director at DC Judo the largest Judo club in Washington DC.

Terence first learned Hadaka Jime over 40 years ago and was known for his talented application of choking techniques in Judo competition. He now focuses on teaching and kata competition.

Terence teaches Awareness Through Movement classes weekly and sees clients for Functional Integration lessons by appointment. He applies his Feldenkrais training in the organization and planning of Judo curricula.