In the ancient martial arts schools there were really only two distinct grades – teachers and students. Various schools introduced finer gradations as a means of establishing public recognition for ability. Given the wide range of skills practiced in even the narrowest martial art, a system of ranks or gradation represent a challenge to create, maintain, and control. Once the school become larger, it becomes more and more difficult to maintain some uniformity in ranking. 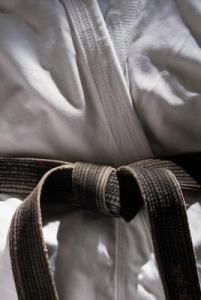 Some arts and traditions have avoided the whole question of ranks. There are no ranks in freestyle wrestling for example. Your “rank” is determined by performance. When and if your performance declines, you “lose” rank. It’s like playing king of the hill – the guy on top wins. This model overlooks the value of the teacher and the coach who may no longer compete.

Others avoid rank as a means of saying “we are all students and all in this together.” They do assert the very real observations that we are in this together and all learning, but even these schools establish who is a teacher and who is a student whether formally or informally.

Some schools use rank for commercial purposes. Sign up for so many lessons and earn a specific belt rank. The rank has a cash value. Judo avoids this commercializing trend by establishing a national body of rank standards. Under the United States Judo Federation, examinations are conducted by regional black belt associations (yudanshakai) to maintain rank integrity.

Other schools manipulate rank to win competitions. If experienced martial arts without rank recognition compete against the inexperienced, they are more likely to win matches. If a school builds its reputation on winning only, then they may find an advantage in not promoting students. In Judo we consider appropriate rank advancement an important part of participating in the community.

Rank – in the form of belts or colors or stripes, or any similar system – is actually pretty useful despite the challenge of establishing and maintaining grades. There are four big reasons for having a ranking system:

For the learning judoka, each rank presents a particular range of techniques to be learned at that rank and so imply a normal progression without dictating a particular curriculum. Students can set goals to learn new throws or holds in order to advance in rank. Generally rank and rank progression helps set learning goals. It also serves as an interim goal to strive towards.

In competition, grouping Judoka by rank serves to protect competitors. Novice and advanced competitors are grouped in different pools or divisions so that one fights opponents with roughly comparable skills and experience.

The kyu or student grades are numbered such that the greater the number, the further they are from black belt. A fifth kyu is further from being a black belt than a second kyu. A first kyu is closer to black belt. Different organizations have slightly different schemes for progress through the kyu grades. For the sake of simplicity, we will focus on senior ranks for the United States Judo Federation. The kyu grades are:

Different colors and a seventh kyu rank are used by the USJA, a different national Judo organization. So what do these ranks mean?

White Belt – Blank Slate. White belt may be the most exciting rank of all in Judo since everything is possible and the whole world is ahead of you. It is the rank accorded to those who come and commit to taking lessons. It recognizes complete beginner status and serves to indicate someone who has come to the door of learning without necessarily committing to the whole process. It serves as a warning to higher ranks that the judoka needs guidance. It is the #1 rank at which people leave Judo too.

Green Belt – Newbie. A green belt says the student has begun a study of Judo. Perhaps the most important part of becoming a green belt is a genuine comfort with falling and being thrown (that happens to green belts a lot.) Green belt recognizes that a student has become a judoka – someone who understand enough about Judo to recognize the range and scope of Judo practice, even if they are not yet capable of more than very basic performance. The green belt examination sets forth a pattern of technical testing in posture and movement, throws, pins, chokes and armlocks as a sampler of all the areas that will grow as the judoka progresses in their study. Many people linger at green belt while they explore the idea of going further in Judo.

Blue Belt – Transition. A blue belt says that the judoka is deepening their knowledge of Judo by mastering and practicing more techniques. Blue belt examination requires double the knowledge required of a green belt – the only time such doubling occurs in the technical requirements. A key new idea is introduced that creates a foundation for application: combinations. Blue belt is a transitional grade and few people remain at that rank for long. Once a commitment to learning Judo occurs, students will often advance to brown belt. In effect, blue belt says “I have begun my journey.”

3rd Kyu Brown Belt – Committed Learner. The sankyu rank is an extremely important one. The sankyu is awarded to those who have committed to the path of learning Judo. It recognizes an important transition as the judoka has learned more than half of the body of Judo techniques. The study of Judo has begun in earnest and the focus often switches from theory to practice. Progress from this point forward depends on the ability to apply Judo techniques in randori, Shiai, and kata.

2nd Kyu Brown Belt – Advanced Learner. The nikyu rank marks the approach to an understanding of full the scope of Judo techniques. The majority of standing and ground techniques have been demonstrated and combinations and countering have advanced. Progress to nikyu is marked by competition victories or an extended period of study. Nikyu must demonstrate the Nage no Kata.

1st Kyu Brown Belt – Senior Learner. Earning the ikkyu requires demonstrating the whole core corpus of Judo techniques. It marks the completion of the learning curriculum where the technical range of Judo has been covered, but not necessarily mastered. The ikkyu needs to understand what constitutes Judo and begins to make more contributions to the Judo community through work as a technical official, refereeing or earning a coaching certification. The study of the Nage no Kata continues as both formal and randori application of Judo concepts deepen with practice. Competition success demonstrates competence in application and shorten the period of study.

1st Dan (Shodan) – Beginning Grade. The first black belt grade is perhaps the most misunderstood rank in all of Judo. While many consider the black belt to be the coveted completion of their Judo study, the shodan really represents the beginning of learning Judo on their own. The real work of learning Judo begins at Shodan when the judoka knows and can demonstrate the full range of techniques, has a record of application in practice, and a record of service to the community. The shodan has internalized enough of Judo concepts and principles to lead a student along the path of their learning and to lead their study.

The real beginning of Judo requires understanding the basics well enough to start work on developing one’s own Judo. Just as master craftsman must pass through an apprenticeship, the shodan has completed their apprenticeship and is ready to develop into a master. The work of mastery only begins at shodan and has not yet been completed. Unfortunately, many consider the black belt to be their final destination and leave Judo having “completed” their study.

2nd Dan-4th Dan – These ranks represent a progression through the process of truly internalizing the principles and practice of Judo. Progressive mastery of application and theory including understanding the grammar of Judo through the katas. Competition, teaching, and service comprise the routes though these ranks based on the personal path chosen by the judoka.

5th Dan  — Generally recognized as the completion of one’s study of Judo techniques and principles. The 5th dan can be said to truly understand Judo.

10th Dan – The 10th dan is the highest rank awarded in Judo. Only a small number of men and one woman have earned this distinction. The 10th dan recognizes mastery of Judo.

12th Dan – No one has been awarded the 12th dan in Judo. Judo founder Jigoro Kano awarded several 10th dans during his lifetime. Martial arts traditions permit granting of rank up to two levels below one’s own rank and therefore Kano is often considered to be the only 12th dan in Judo.